Danny Mekić (24) was fifteen when he started his first company. Recently he’s started NewTeam, a consultancy firm staffed by teenagers and people in their twenties that advises on technology, media and communication.

Being in touch with the younger generation, can you explain why they hide their financial problems and don’t try to get help from debt assistance programs?
“What I notice as a university teacher is that they think it’s cool not to make ends meet with their income. When they’re in the red, it doesn’t feel like they don’t have any money to them. They don’t look ahead any further than what’s in their pockets to pay the bar tab with. They’re bad at keeping track of what expenses still to expect, like rent, phone bills, subscriptions and so on. They’re not bothered by two or three written demands for payment. They know exactly how long they can put off payments and what payments are the easiest to put off. To them, asking for help means losing face to their friends, but also to themselves. I’m not sure they hide their financial problems or don’t dare to get help. I ‘d sooner say their attitude is a result of an individualistic society. Young people want to do and take care of everything themselves. Including debts that have been piling up.”

Will that be worse once young people will be able to pay using their mobile phones?
“It used to be that in order to buy something, you needed bank notes. That wasn’t such a bad idea, because it meant people handled their money very deliberately. Nowadays payment methods are so easy that you only start feeling your problems when it’s too late, when you can no longer withdraw any cash and direct debits – and all future payments – can’t collect any more. A mobile phone, to people in that age group, is a tool they use lightheartedly all day. That lightheartedness is going to extend to mobile payments too. Of course, technologically speaking, it’s a wonderful development. But the challenge to the financial world, but also to companies like GGN and telecom companies, is to also find ways to use this innovation to make the younger generation’s financial situation more transparent to them and to protect them from financial missteps.”

What is money to you, personally?
“Freedom. I took up entrepreneurship at the age of fifteen, because companies don’t give a fifteen year old the opportunity to realise their ideas. That’s reserved for older people with more experience. I also wanted to show the world you can achieve much without a degree. As an independent professional, you’ll build up a much better network than as an employee. Entrepreneurship only started being fun later, after I’d sent out my first invoices and the first payments arrived. After the second and third client, I started to feel more entrepreneurial. I discovered what that freedom could give me. I covered the travel and accommodations expenses of my first visit to America by giving advice to the hotel company.”

How would you describe your own spending habits?
“With my private expenses, I sometimes need to be reminded to pay my bills. I’ve automated most of my payments, but I’ve also set a lower boundary on my balance, so there’s always enough money on my bank account. I’m strongly opposed to being in the red. I had that possibility removed immediately when I had to open a new private account recently. I’ve never been in the red and I never will be. Every other form of borrowing money is a lot cheaper compared to borrowing money from a bank. I’d say: borrow money from your friends. It’s less expensive and the social pressure will get you to pay it back sooner. Or just don’t go on holiday this time. As long as you don’t have to pay ten percent to the bank.” 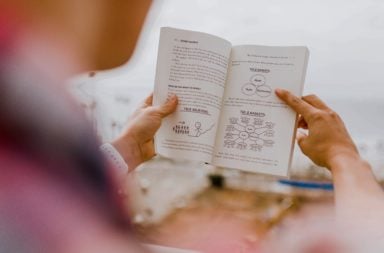 “The ad blocker is a godsend”

Will Spotify and Netflix replace the cinema, the library and the concert hall?

Customer brand loyalty is disappearing; what can you do to keep your customers? 5 tips.